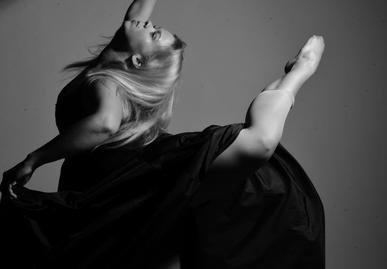 Samantha began her dance career at the age of 3 at Marta Jackson School of Dance under the instruction of Marta Jackson and Linda Elchak Samuels. She has studied Ballet, Tap, Modern, Lyrical, Jazz, Acrobatics, and Contemporary styles of dance for over 25 years, as well as Rhythmic Gymnastics for 8 years. She competed in regional and national dance competitions from the ages of 3-17 and won many awards and scholarships. Samantha was awarded the Ambassador of Dance Master of America award at the age of 15. She continued her education at Florida State College of Jacksonville in the FSCJ DanceWorks Company under the direction of Rosemary Fletcher and Maryanne Aycock. She worked with many internationally recognized guest artists such as Edgar Zendajas' company EZDanza, and Tony Parisi, an award-winning Broadway performer, choreographer, and founder of Camp Broadway. In 2009 she worked with award-winning Bollywood choreographer Rujuta Vaidya, and the Trey McIntyre company. Samantha also worked as the DanceWorks Company Manager for one of the three years she was enrolled in the company and received the Talent Grant Scholarship for all three years.

In 2014 Samantha choreographed a piece for a short film by Drew Brown called "Person," which went on to receive a Student Academy Award and received a nomination for the 2014 Oscars.

She received her AA in Dance/Dance Education in 2010 and her Bachelors in Fine Arts Degree  from the University of North Florida in 2020.

She is certified in Acrobatic Arts and Progressing Ballet Technique (PBT).

Samantha is now the Artistic Director and Co-Owner of Relevé Academy of Dance.